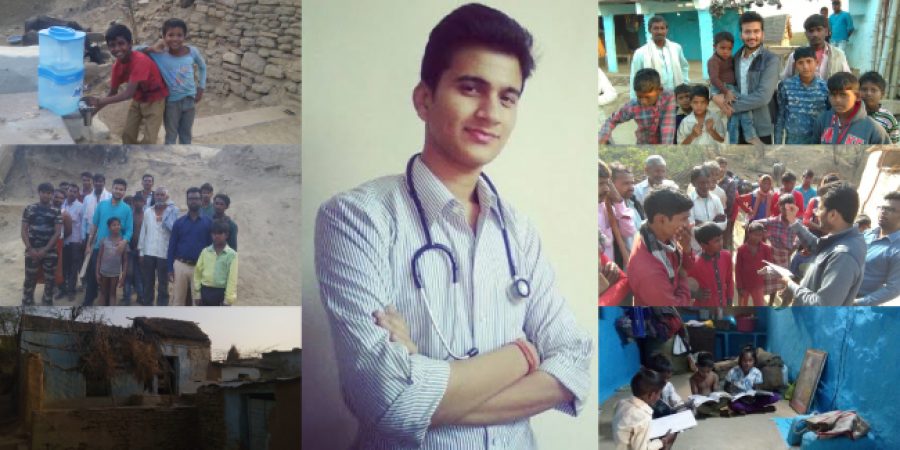 There is a huge number of people in the world who want to help the less fortunate but are always discouraged by certain limitations and their own busy lives. After interacting with Dr. Ashwani Parashar, we were absolutely inspired by his beliefs and achievements. This 23 years old MBBS student of SMS Medical College in Jaipur, born and brought up in Dholpur, was there to help a village in Rajasthan when everyone had seemed to forget about its existence.

How it all started

It all began one Diwali morning in 2016, Dr. Ashwani and a group of his friends, decided to celebrate with the villagers of Rajghat (a village located at a distance of a few kilometres from his hometown Dholpur) in Rajasthan by distributing gifts like firecrackers and sweets. While his friends were distributing said gifts, Dr Ashwani ventured into the village talking to the locals and looking around the place, when he found himself being informed by the villagers about their terrible living conditions.

The locals told Dr. Ashwani about their lack of electricity, food, water, and roads. They told him that the only source of water available to them is from the famous River Chambal, excluding a hand pump in the village with water of 1600 TDS. “In addition to there being crocodiles in the river, it is polluted and there have been some encounters of villagers finding swimming dead bodies of both adults and children alike. Getting to know that people have to risk their lives for something as simple as water here was completely horrifying” he said.

Dr. Ashwani discovered that in the village there was only one government school for up to 5th class with just one teacher and a single room. He also found out that there were a lot of bachelors in the village as no one was willing to marry off their daughters to a place that had no amenities of any kind. Inspired to help these villagers, he decided to try and do something to help them. “I had to do something for the locals but I was very young, just 20 years old, I had no resources, no connections, and no idea how to go about it” he said. Disheartened by this, Dr. Ashwani returned to his home when he came up with the idea of raising funds through his connections with senior doctors.

The birth of a new campaign

With the support of Dr. Ashwani’s friends, a new campaign #SaveRajghat was created. He wrote letters to the government addressing the village local’s ‘Right to Life’ and forcing them to take notice. He approached many government officials and even wrote letters to the Prime Minister of India and Chief Minister of the state. When he thought he was at a standstill, suddenly came a day when officials from every department started visiting the village, asking the locals about their problems.

“People had asked me why I was so obsessed with helping Rajghat when there are thousands of such villages all over India. I told them, call me crazy, call me a lunatic, but I just want to decrease one village from your list and I will, somehow, I will.” He informed proudly.

After such a long time of fighting for the rights of Rajghat, Dr. Ashwani decided to try a different approach as well and reach out to some associations for help in their campaign and that is how by the Diwali of 2017, he was able to install solar-powered photovoltaic (PV) panels that convert solar energy into electricity in five of the houses in the village, through crowd funding, belonging to girls in classes above the 5th standard who went out to study, “I wanted to motivate the villagers to study and understand how important education is” he added. By 2018’s New Year, he was able to install solar panels in all of the houses. By 26th January, Dr. Ashwani had cartridge water purifiers installed in each house and school. Apart from these amazing achievements, he was also able to diminish the excessive drinking problem in the village.

The people of Rajghat love him and treat him like a family. “Now whenever I visit the village, they are happy to see me, the elders of the village treat me like a son. One elder even came up to me and said that he can now die happily as he had finally seen electricity, he is 70 years old. In a village where life stopped at 6 pm because of the dark, what is truly a big achievement for me is the smile on their faces.” he added.

Two foundations in Maharashtra have joined Dr. Ashwani in helping the village further with smart education by installing a cinema projector in the village itself to show the locals inspiring movies that make them understand where the world is now and how they should progress too.

Taking action against the state

“I have filed a Public Interest Litigation ‘PIL’ against Rajasthan in the Rajasthan high court, we’ve had two hearings, and the state has received a notice of right to life from the high court demanding the reason behind the poor living conditions of Rajghat. We still have more hearings, this process is long term, but it’s safe to say the state is worried as they are soon to install electricity in the village.” he said.

Now, people from all over the world are reaching out to the doctor. Offering a helping hand from countries like America, Canada, and recently Kuwait, giving him their full support.

When we asked him if he would continue helping the underprivileged, he told us that wherever he goes, wherever he settles, he would try to help the people there. Dr. Ashwani Kumar Parashar is truly an inspiration to all of us. Support this compassionate young man by supporting #SaveRajghat.

The Editorial Team at The Inspired Talks. We love to hear from you. Do send us your feedback. 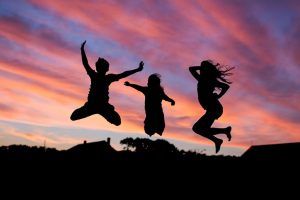 Each person is a brand and stands for something. Even[...] 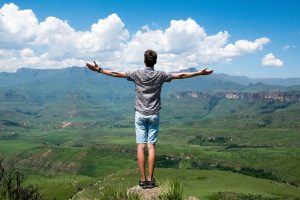 10 Ideas to Improve your Personal Growth

We are all always working to grow and be more[...] 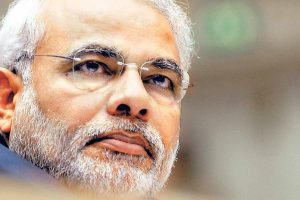 15 Quotes of Narendra Modi which Changed the Nation

Narendra Modi, the 16th Prime Minister of India is a living[...]

Your email is safe with us.